Filling up the tanks, had to be done once in a while.

After a night in El Centro, again, we headed towards Yuma, Ineke and i had our hearts set at doing a bit of shopping, yes, the dollar was still way too high, but heh, us ladies just needed to look around a bit!!   We had fun!!!    Found some good deals for ourselves and some very  , if i may say, sexy shorts for the guys!!!        They even wore them right away, and they looked GOOD!!!!!!!!

Tuna hatcheries, off the coast, North of Ensenada.

We traveled North on the highway 1D, along the coast, just North of Ensenada, we noticed big circles near the shore, with boats around them, here and there, and we found out later on that they are tuna hatcheries.     The ocean just sparkled and shone, like showing off her diamonds, what Shendra’s husband would have said, it was so good to see it again, the Sea of Cortez is lovely but nothing compares to the ocean to me.    We found Clam Beach, found Linda and Les and Judy and Don, and stayed one night.    There was no hot water, and also no one to pay for the night, kind of a strange setup, but we slept well.   next day we headed to the border, to Tecate, back into the USA. 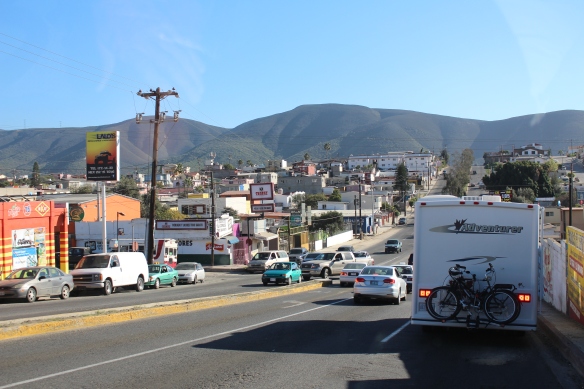 Trying to find our way through Ensenada 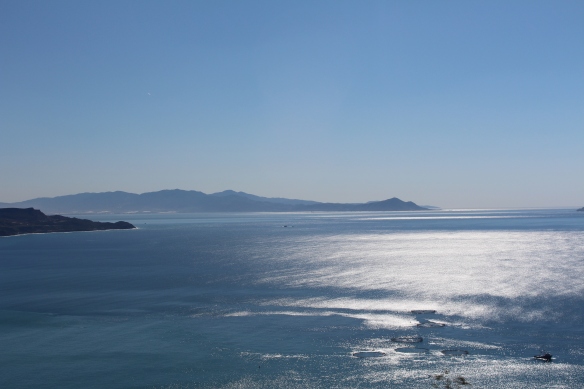 Just to give an idea of the gas prices in Mexico, in San Felipe, we paid $13.16 pesos per liter, one US dollar was around 16 pesos at that time.     At home the price was 97 cents per liter, so, overall not too bad.   So far we had driven ;3222km!!!!!      The Westy kept on purring, very happy van when she is on the highways.    The closer we came to the ocean , the greener the country side became, dew ,at night, from the ocean, covers the country here, and we started seeing orchards and vineyards.   In one area, Joshua trees showed up, they looked to be in very good health, cacti became taller and more numerous, some strange plants grow at the road side, when we were stopped, i investigated one of them and found that the leaves had a marvelous smell, i have kept some of them, they are dried, but still have that incredible scent.  I went online, to try and find the name of this plant, i was given a list a mile long, without photos, so, thats the end of that!!     But, here is a photo i took. 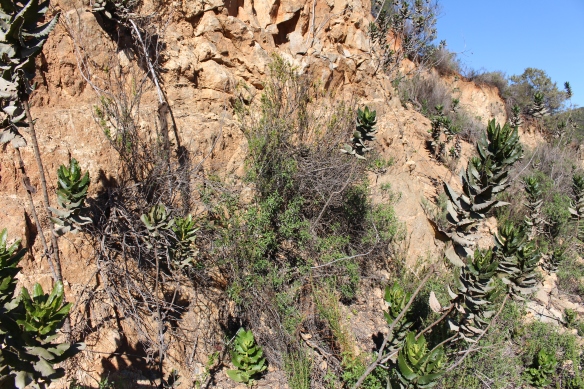 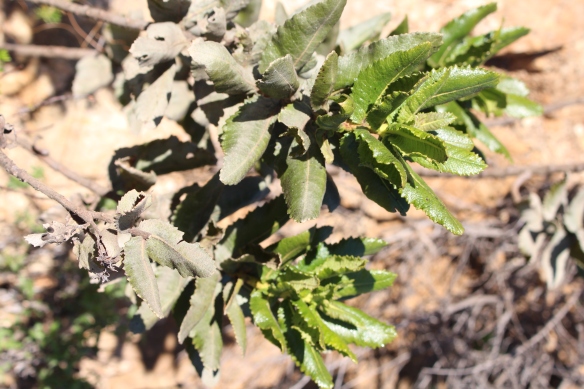 Does anyone have an idea what kind of plant this is??? 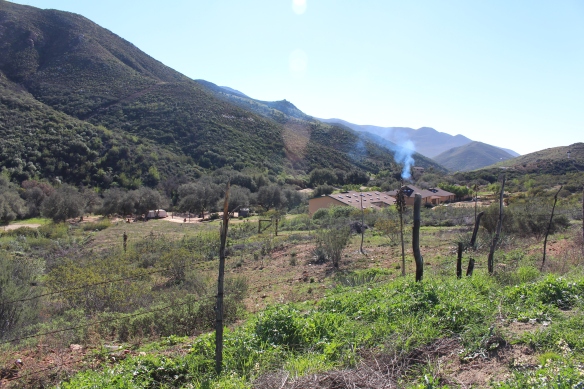 Slowly,as we came closer to the ocean, the country side became greener ,with ranches and orchards here and there.

The plan was to head towards Ensenada, and camp at Clam beach.    Linda ,Don and Judy and Les were already there.    It felt good to head towards the pacific ocean , we veered off and headed inland, coming to a military checkpoint.      The soldiers, dressed in desert fatigues , carrying very big guns, smiled at the Westy, peeked inside and told us to have a good day!!     The desert is immensely dry, here and there, a cactus shows itself above the sand, but mostly it is all rocks and sand, beautiful red colors , laced with browns, it is such a different landscape from what we are used to.      Here and there , we saw a shrine , built into the hillside.     The closer we came towards the coast, the greener the landscape became, dew from the ocean covers the hills at night, and we started seeing orchards and vineyards. 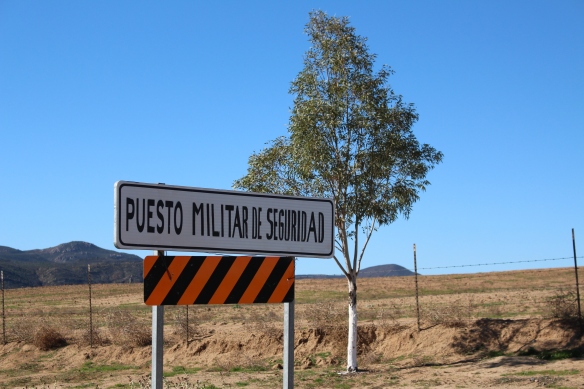 This week, right now as i write, the Baja 250 is being held, a 250 mile long loop through the desert, all of our friends are still there, to cheer the competitors on, i could not imagine, sitting in one of those buggies for 250 miles!!!!       There are check points all along the way, and they have lots of supplies with them, but even so……not for me!!!

I had a ride in Chris’s dune buggy, together with Fred and Bert, and the only way i would not lose the fillings in my teeth, was to lift off the seat, push onto the steel bar on the floor with my feet, but it was a ride to remember, unbelievable, how these rigs go basically anywhere, at one point, Chris climbed up a sand dune, well, not climbed, RACED up there, full tilt, and no one knowing what was on the other side!!!!     I let out many a scream, some of joy, some of a bit of terror!!!

The suspension and the tires on the Chris’s rig left me with nothing to worry about!!!

It seems that the number one pastime here and in California is dune buggy travel through the desert.    The more you head South in California, and go inland , the more very large RV’s ,pulling a trailer with a dune buggy appear, heading for racing sites, its a huge sport here, and there are many races held throughout the year.

The Baja California is no different, most of the buggies are owned by Americans, but some Mexicans drive theirs right down main street, i noticed actually, that a lot of the cars do not have a license on them, they kind of race around the back streets, and as far as i know, do not get caught.     The odd police car cruises around the malecon, keeping on eye on the loitering  ,young men and girls, but the whole time we were there ,i never saw any problems, other then the bike theft, i found the folks very friendly and nice to (try) and talk with.    I am now learning Spanish, love speaking the language, and someday, if we do go back, i hope to be able to speak a bit better, to be able to have a conversation with someone.    Anyways, back to the dune buggies.      Some of our newly found American friends, have a dune buggy, Chris has a dandy, a very mean looking machine, capable of climbing the highest dune.      On one of the first days, he took Bert and Roel out on a trip, the guys got strapped in , very snug, and very safe, later on, when i got a ride, i could see why……      He took them all around the town, into the dunes and on the beaches.     They came back, smiling broadly, so they had fun!!!! 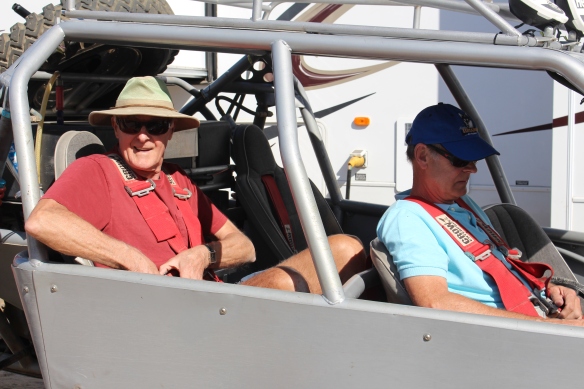 Like i said before, we went out a few times, one of them , we headed to the Malecon, to one of the  restaurants,open to the Malecon, so all kinds of folks, salesmen, guitar players, well wishers ,came walking by, or stopped, trying to get our attention.     One older gent, carrying his trusted old guitar, smiled at me, smiled at Bert and started singing and playing.    He sang an American song, and i so wished he would have just sang and played a Mexican song, but the majority here are Americans, us Canadians are quite rare here this year due to the dollar.    I am sure he thought he was doing good for us, Bert gave him a nice tip.       So, one of the things i loved to eat here, and i just found the name in my diary, are Cheviche Camarones, Camarones are shrimp.     They are caught here locally and are soooooo good!!!!   I didnt take a photo of them, not smart, but i am going to try to make them here.

One of our hang out spots, mostly sipping margaritas and eating tacos with guacamole!! not much wrong with that……

The biggest problem at times was to find a proper washroom, and one day, one of us found this lovely building, with washrooms that were relatively clean.    The tile work leading to the upstairs was just beautiful, i had to take some photos.

Downtown, San Felipe, where public washrooms were hidden, only to be found by walking up this tiled stair case. photo following.

I so love these colors, what a nice job!! 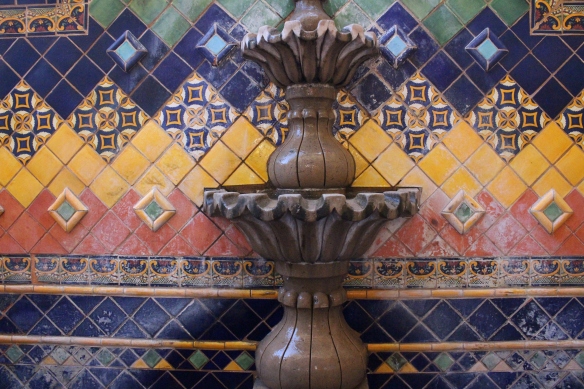 Detail of the (not working at the time) fountain.