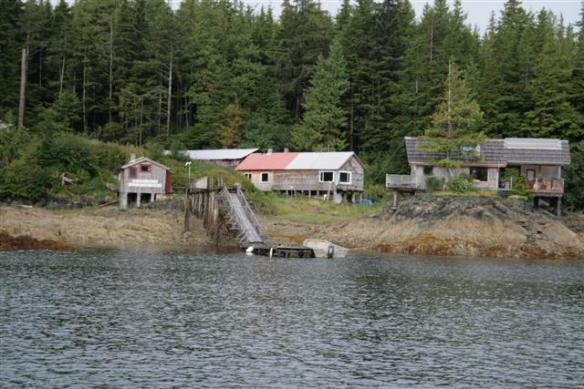 We left Ketchikan on August 13, a very foggy, dark morning, good thing we had the radar on, as a huge cruiseship came out of the fog, very slowly, accompanied by two harbour police vessels, big guns mounted on the front of their boats, they were making sure that  any  boat did not come close to this cruise ship, they looked at us with suspicion, but then smiled and waved us on, ohh, just a couple of Canadians!!!! Scary though, all these guns, you can but them anywhere, you see them everywhere, just not used to that!!!  I dont think a cruise ship is treated like that in Victoria…… We managed to make it through Tongass Narrows, into Clarence Strait, here the fog dissipated, there was a bit of wind, and we made it to Meyers Chuck, (where i am writing this now), a wonderful small bay, the shores are full of little cabins, there are no cars, just little boats, and most of the time, 20 people live here. We liked it right away, anchored smack in the middle, ( we were and stayed the only boat) and had a good night, the stars came out , i had not seen them for a long time. 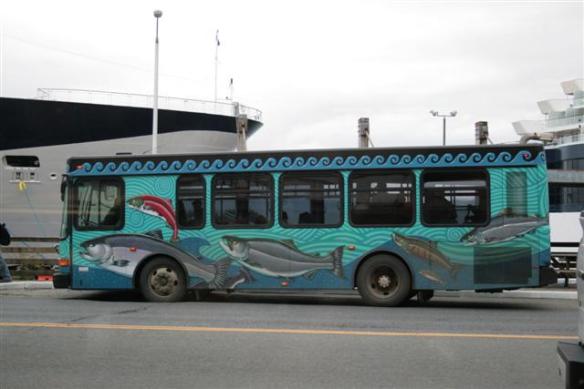 We stayed here a few days, we needed groceries, wine, and wanted to take a look around.     The Old town part, where our marina was, is interesting to walk through, amazing how some of these houses have been built, against the cliff, held up by huge timbers, a road runs along the cliff, also built basically in the air, its all suspended,and held in place by the cliffs. We liked the old part, found a nice coffee shop, and watched life go by for a while. Then we walked to the cruise ship docks….there, it feels like you are in a totally different town, everything is “new” looking, all very clean, all very expensive, tons of advertising, the stores are for all the cruiseship people, apparently the cruiseship companies put them there, just for that purpose, these stores close again when the ships stop coming.  People everywhere, hordes of them, huge lineups for going back on the ships, no one would smile, or say hello, a different world……We watched things for a while, and took some pictures, then went back to “our ” part of Ketchikan. We chatted with a couple from the sailboat next to us,Steve and Ginger from  SV SEA JAY, they were on there way south, and thought we were totally crazy to go north at that time. But, they gave us the names of some very beautiful anchorages, and we went to most of them. They are from the States but keep the boat in Sointula B.C. for the winter. The weather was not too bad, a least it didnt rain. 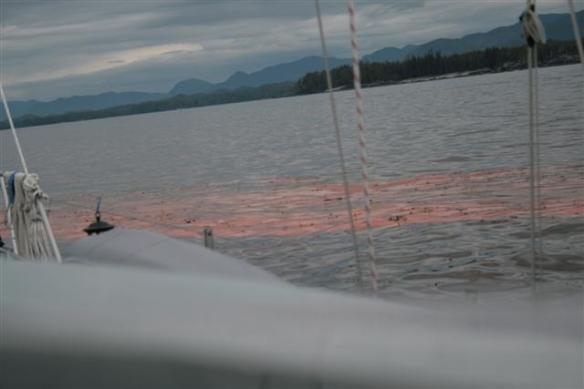