Bloody cold that morning, the tide was turning soon , so we decided , as did everyone else, to leave before the tide would run too hard, its a good thing we did, i just read again in the book; EXPLORING SOUTH EAST ALASKA by Don Douglass and Reanne Hemingway Douglass, it states that the entrance into Tracy arm is 1.75 miles wide, but the navigable channel is only 0.3 miles wide, it is about 36 ‘ deep, and there are two buoys , green and red.   It states in the book, that the buoys may become submerged during a very strong tide and currents.      Yes they do!!!!      As we tried to navigate into the channel, we were only doing 1.6 knots, the red buoy totally disappeared , the green one toppled over!!!   We heard later on that the other sailboat, SA VAHN, ended up sideways in the channel, trying to get out!!!      The channel stays very narrow for quite a while, so it took a long time before we could veer off towards Portside, on out way to Taku Harbour!!  (TAKU BAY)    Whales everywhere in Stephens passage, i could not believe the number of Humpbacks!!     They all shore feed mostly, also bubble feeding , which i will tell more about later, but these whales are up North here to eat!!!! 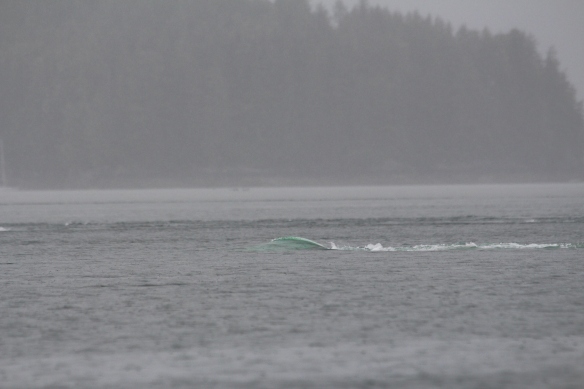 The green buoy, totally sideways, you can tell by the current how strong it was running!!