We had met up with three other boats here, i should mention them properly,  The first one is CRUZEIRO DO SUL    with skippers Gail, Tippy and George, then MV IMAGINE    with skipper Don and his wife Ann, and then Sailing Vessel SA VAHN (which means heaven), with skippers Claire and Fiona.     In the next few weeks we will be traveling off and on , together with these boats.  We invited Gail for dinner on June 20th, as we stayed 2 nights in Thomas bay, i made Zuurkool met worst, sauerkraut and sausage, a very true dutch dinner, and i think Gail liked it, he had a second helping!!         There are so many wildflowers here, tons of lupins, and i picked a small bouquet, also lots of birds, HARLEQUIN DUCKS!!!     how beautiful they are!!!!    Also Oyster catchers, you cant help but notice them because of their strong , loud call.       June 21st is the longest day of the year,  Summer Equinox, actually, i found out later that it was June 22nd, it ended up being also the coldest and wettest  of the year!!!   BBBRRRRR…..!!!!!!!          June 22nd actually was sunny!!!         A bit of warmth , Bert had to fix the dinghy and was grateful to NOT have to do it in the cold rain!!

Orange,Mottled Sea star, planning to drop into the water. 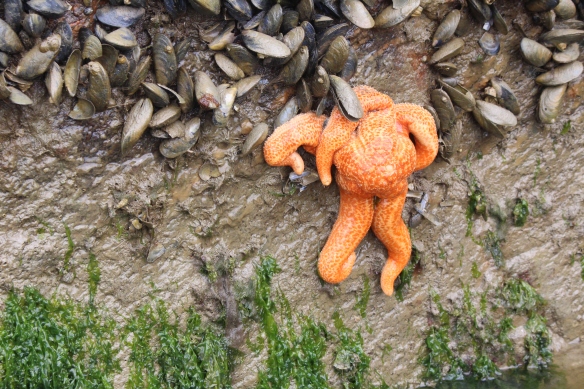