On June 30th we left Prince Rupert ,i really wanted to go to Dundas island as there are Sandhill cranes there, but because we had a deadline ,having to get to Glacier Bay on the 19th of June, we decided to go to Foggy bay, which is already in the United States.    We called in and asked permission to anchor there.     The tides were very low and very high at the time.     We headed out at 11.30, Baraka Bashad had already left, Waterford was behind us…..      The entrance and exit in Foggy bay is very narrow, but we had the chart, all rocks were marked on the chart, or so we thought……      At 11.39 we hit a rock, very hard, hard enough for the things to go flying down below, hard enough for the batteries, all 6 of them to move 6″ forwards, into the cabin!!     I remember screaming, out of pure horror and fear, Bert told me to take the wheel , and went to the engine room, to check things out and to see if there was water coming in.     i managed to keep the course out, also went on the radio to tell Waterford what was going on, they were very concerned, the USA Coast Guard heard me, and hailed Curtsy right away, they asked me my name, as i was so shaken , i guess to see if i was still with it so to speak, ( i did have to think about it for a few seconds…), no water coming in, all seemed ok in the engine room…….    You need to know at this point that we have a day tank, for our fuel, and i fill this tank every day , once its at half, to make sure we have enough at all times.    The main tank is in the keel, it holds 500 liters of diesel, but i knew we had 100 left in there, the plan was to fill up in Ketchikan.      Anyways, they called me every 20 minutes or so, in the meantime Baraka Bashad , who already was way ahead, came back to be of assistance, Bert took the wheel again, told me ,no, there is no water coming in, (as far as we knew), and i ventured below, and was met with an incredible mess, the shock of the impact seemed to have been centered in the galley, dishes had come flying out, all broken on the floor, a bottle with olive oil was happily emptying on the floor, but the funny thing was , the rest of the boat was just the same, as if nothing had happened.   Another power boat, who had anchored in Foggy bay also, and had left before us,called us and  offered assistance to us, just in case….. We headed to Ketchikan, and i insisted on getting a diver, to check the damage.  It rained, and rained, did i mention that ketchikan gets on average 286 days of rain in the year??     I believe it….      We were assigned a slip in Bar harbour, tied the boat, and i started breathing again, kind of…..     We were so exhausted, Bert did not say much , he was very worried.   The diver came, a very nice young lad, he brought a camera to show us what the damage was, and we realized we needed to haul out.   I need to mention too, that Bert noticed hydrolic oil in the engine room, something was not right……  The next morning, at 7 am, both still sleeping, a knock came at the deck, “harbour master”!!!!    ” You need to move”!!!!!    “WHAT?????”    it was blowing 32 knots, and rain coming sideways!!!!        The boat belonging to that slip was coming back, lovely!!        Both in our pajamas , we got Curtsy going,  no idea where to go, as Bert tried to manouver the boat out of the slip,  i was up at the bow, bare feet, pajamas ,the hydrolics gave out, no propulsion!!!       I think i stopped breathing, now what???   we ended up sideways in the channel, happily settling against the anchor of another boat, the owner was inside, came out after hearing the thud, and in pouring rain, in his pajamas (!!!!), helped us manouver the boat , together with the harbor master, who came running, to the slip at the end.    We have never been so wet, never so cold!!      There we were, hole in the keel, no propulsion, and i just thought, this is it, i am NOT going on any further.       As it happened, the young lad, who dove for us, also knows all there is to know about hydrolics!!       He came back, disappeared into the engine room, which now was a total mess from all the oil, and found the problem!!!       And, not one caused by the accident either.      A hydrolic hose  had originally been crimped too hard, which had caused a weak spot, which eventually would have broken!!!      So, for 14 years, we could have had an accident somewhere, maybe going through Seymour Narrows, anywhere, and then not have any propulsion!!!!     I was so grateful for how it ended up, actually, so meant to be, the young lad put in a new , proper hose, new oil, we cleaned all the old oil, and then planned the haul out.     We had been given the name of the owner of the only haul out near Ketchikan, also the name of the very best fiberglass man in the area, Wayne.     Wayne is a man of very few words, “could he work on the boat??”   ” Yes”!!! “could he start tomorrow??”    ” yes”!!!!    Alright!!!     The USA Coast Guard called me twice more on my cell phone to make sure we were ok, and that arrangements had been made.   We are very impressed with them, they never let up , making sure we were okay.

The diver had come up , holding a piece of Curtsy in his hand, i have that piece, a reminder that something like this can happen to any boater, anywhere, any time.   Remember i filled the day tank with fuel, so we had enough to go the few miles to Refuge Cove, next to Ward Cove, “AIR MARINE HARBOR”  was the company with the haul out .   We hauled out at 9.30. 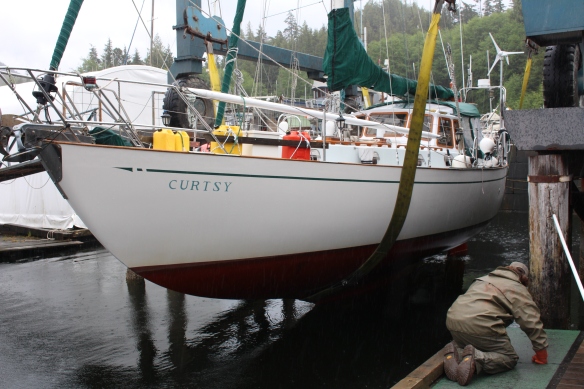 Slowly she is coming out of the water. 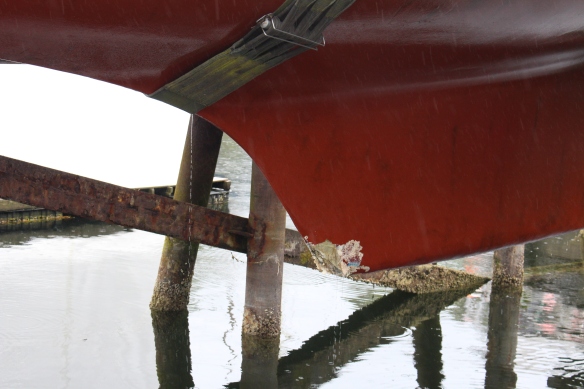 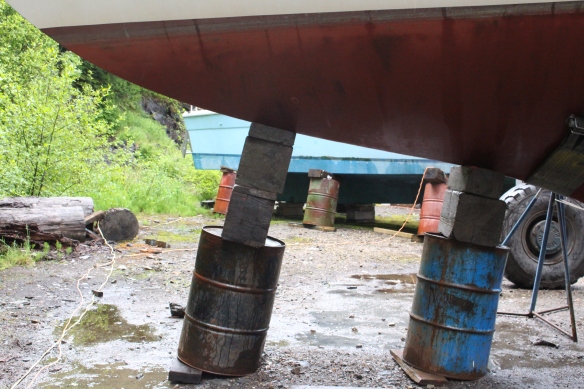 We were amazed by how they support the boats, but i tell ya, she was not going to move!!!