The boat is doing well. Bert checks the oil every day and it has not gone down as yet.   We run the engine rpm at 2000, which seems to be compatible with the hydrolics.  It all sounds good, and mostly we do around 6 knots, which is great!    I have noticed though that the new batteries do not seem to charge fully, i dont think they are as good as the old ones, they do not hold their charge long either, plus, we have not had much sun as yet, mostly rain, rain, rain, which means the solar panels are not as yet filling the batteries either.     We left Coghlan Anchorage on May 26, around 9.30 am , heading into Grenville channel, Grenville channel is the main Northern route, used by cruise ships, commercial boats and everyone else.     It has to be planned carefully, usually the weather is not too bad in the channel, but, the ebb tide runs very strong , as much as 6 knots, so we had to plan our start , at the last of the flood, so when we would get to Klewnuggit inlet, our destination, the current would start running the other way, its tricky to say the least, but the natural beauty along the way was amazing, mountains still covered with winters snow, waterfalls running hard!      I believe we met the ferry, new ship from BC ferries, a good looking boat, but other then that , we didnt meet any other boats.   Waterford motored behind us, Baraka Bashad was already way up ahead. 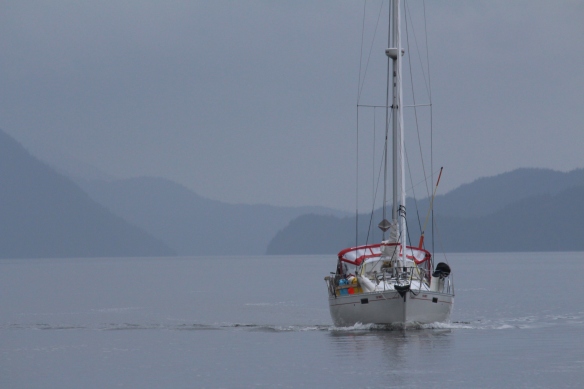 Lots of water coming down from the mountains at this time of year.