We had a storm last week, a doozer, i saw on the Passageweather.com that the wind would be coming this way for sure, up to 35 knots, mostly South….      Tess was still with us ,sleeping in the front , and its safe to say she didnt sleep much that night.   The wind started early in the morning, and by 5 am, it was gusting well over 45 knots.     We usually do not get South wind here, so because of the direction, the docks were put under tremendous strain.     At some point, early in the morning, a whole slip at D dock gave away , boats and all, one large sailboat, one large powerboat .          When i looked out that morning, things did not look right, Bert received a phonecall to come and help ,to try to pull the dock back into place, together with Mark , Blythe and another gentleman, they managed to pull the dock WITH the boats ,back to the piling, tied it down and congratulated each other on a job well done!!!         The wind didnt die down till the afternoon, Matt, our harbour master, was right on the ball, arriving with contractors, who put all new wood and hardware on the dock, where it attaches to the piling.   Job well done!!!! 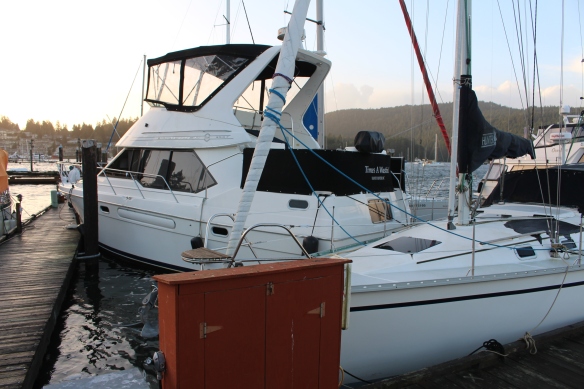