We arrived home to a nice, dry, clean Curtsy, everything looked good, nothing had leaked or was blown off with the high winds they had here while we were gone.    We did know though , that we had to replace the hot water heater in the engine room, it had sprung a leak the day before we left, it was 5 years old so that’s not too bad……apparently…….The tank is stainless steel, but the inside is not, it cracked on one of the corners, and the water nicely ran into a bowl, as if it was put there just in case….

Bert installed a new tank, and we are good to go.      Then, on a very , very rainy night, i heard a unfamiliar drip…… sure enough, there was a leak in the main cabin, alongside  one of the vents.    We had trouble there before , but Bert thought he had fixed it.     It leaked hard!!!!!       To this day i think it is a small miracle that it didnt leak while we were gone, not a single drop on the floor!!     (its carpet, so i would know).      While i was gone grocery shopping, Bert took the whole ceiling apart, and the floors, and everything else that was in the way, he then could trace the water as to where it was coming from.      Several tracks run in the area of the leak, so he proceeded to take everything off, clean, and reseal, with caulking.     let me show you what things looked like inside.

What you see here is the deck, Bert took off all the old insulation. 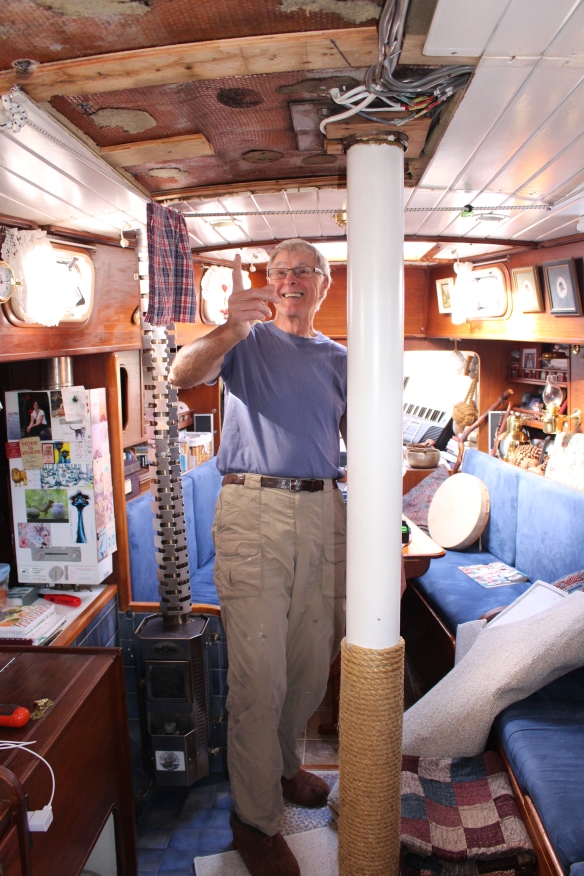