There is a carver house here, where 3 master carvers work on the last of the totem poles to be erected at Bartlett Cove  in front of the Tribal hut, close to the Parks Headquarters, here we met Owen James, his Tlingit name is Little Frog, a quiet, humble man, he was carving the base of the pole and gave us several pieces of the yellow cedar, i have them here in the boat and they smell like Hoonah, like the beautiful  Tribal hut, i am instantly back there ,every time i smell the cedar.      There is special lighting in the carving shed, which made it hard to take photos, but i made up for that at Glacier Bay park.

One of the large canoes is here, carved by the Tlingit people, Owen is the main captain and leader of the canoeists  , he teaches the paddlers all the safety methods, what to do when the canoe tips, with 14 people in it!!      It is a matter of seconds ,they have to be in the canoe , out of the freezing water, the canoe upright, all water baled out, and underway again.      He talked about it so humbly, but i could only imagine what it would be like, being out there, wind blowing at 25 knots, rain sideways, then a very large wave, tipping over, not panicking but pushing the canoe,which is upsidedown,  halfway back up, first two people on either side hang over the canoe, baling all the time, then the next two people , and so on.    This has to all be done in seconds, otherwise they wont survive.  They have to keep moving because of the cold, one girl he told us, panicked at the training session, she hid her face, and shook with fright, Owen quietly sat next to her, and started talking to her about something different then the canoe, she slowly calmed down, stopped shaking, and smiled at him.       She did great when they practiced!!!!      The canoe has baling containers all through the bottom, tied down with a long enough line for the baling.

The canoes are carved out of one very large Sitka Spruce log!!! 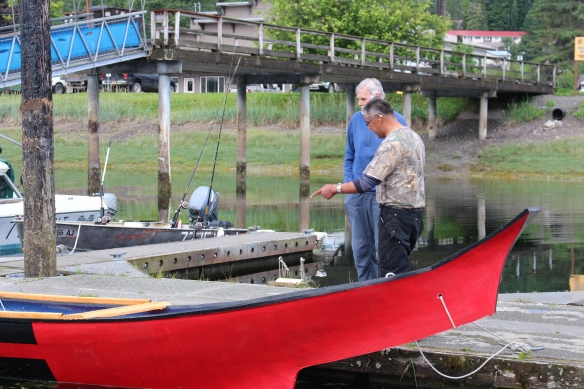 here Bert is talking with Gordon , the leader of the building and carving of the Tribal house in Glacier Bay.   The canoes that were built in Hoonah were used by the Hoonah residents for the Tribal House dedication in Glacier Bay in August 2016.