After San Lui Obispo we headed first to Los Osos, where Bert could get some of the spare parts for the Westy, plus i bought him two Westy T-shirts. We checked out Montana de Oro park, overlooking the ocean and the beaches, most of the walkways had been closed off to try and give the local plants a comeback, these dunes are very precious and lots of people walking all over and through them is just not going to do it, but we did notice that there is very little garbage lying around, a good thing.
We ended up camping at Avila Pismo beach.
We stopped in Cambria the next day, a very fancy town, everything was so expensive, beautiful art but just not affordable for us, plus we cant use it anyways.

On the way up we had stopped at the Elephant seal rookery, it had been pouring rain, the animals were just lying around , nothing happening yet, so we didnt stay, but this time, the rookery was very busy indeed, lots of babies were born, and the females were oh so busy, trying to nurse them, fling sand over them and themselves to keep cool, the males were being a total pain in the ass, trying to mount the females while they tried to protect their babies, the big males, weighing as much as 2300 kg.can easily crush the babies, which happens frequently.
The females weigh as much as 800 kg. quite a bit smaller then the males.
In December through February, the males battle for breeding rights, and they can go without food and water for up to 100 days.
While we were there in December, males were slashing at each other, some with bloodied chests, one very big and powerful one definately had the advantage, and chased most of the smaller males away. The females were just lying about, yawning, looking very bored with it all. 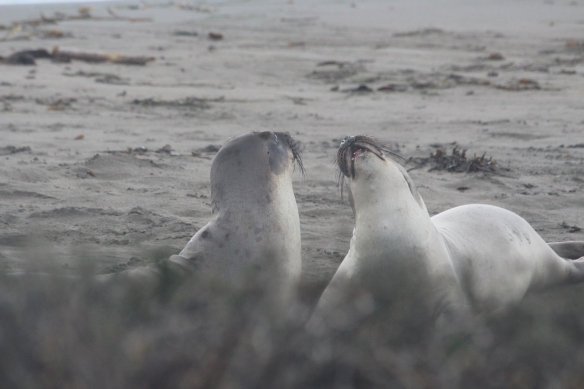 A very dreary,dark day, but the Elephant seals dont care!!