We all decided to start driving north again, Bert still wanted to stop in Los Osos, where the Westfalia store is, we met up in San Clemente with Roel and Ineke, shared lunch there, at the little cafe we had found earlier in the trip, and then they headed out, towards home and we kept driving along the coast, past L.A. past Santa Barbara, towards San Luis Obispo. It is close to Los Osos, we had not planned to stop here, but its a very nice town, cute coffee shops, tree lined streets for shade, so we roamed around for a while.
The earliest humans to live and settle here in San Lui Obispo were the Chumash people.
In the 1700’s things changed, Spanish missionaries settled in the area, two missions were established, Presidio of Monterey and San carlos Borromeo, the Spaniards settled there and organized hunting parties to bring back food ,mostly bear meat, the native people were very impressed by the ease with which the Spaniards brought down the huge grizzly bears. The Spaniards traded some of the bear meat for seed with the native people, they all got along very well, the area had plenty of fresh water and food, and the climate was great, so eventually the town of San Lui Obispo was established.
Spanish is still a big influence , which shows in the buildings and art.
In one of the streets, we found a wall, large one, totally covered with old chewing gum!! Now this has nothing to do with me mentioning art, but its the strangest thing to see, quite gross too actually……..
here are some photos in case you dont believe me!!! 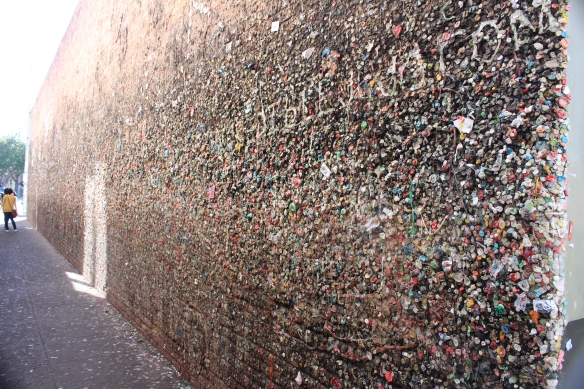 Just in case you still dont believe me!