We again left the big highways and turned onto a little road, towards Acton, we had seen a KOA sign , for camping, but had no idea what to find or expect. The area is called the Desert View Highlands, and we had to go over the Soledad pass, which has an elevation of 3.179 feet!! the area is beautiful, giant Aspen trees sway in the wind, they still had their leaves but were turning color ,a combination of yellow, green and orange.
we found the KOA ,thank goodness, almost turned back, as the road became smaller and smaller, but there it was, nestled under these Aspen, close to the railroad tracks. By the way, no matter where we went , there were railroad tracks, and trains, all night long, but i did get used to them after a while, unless they blew their horn, right alongside the camp spot!!!!

While Bert went into the office to pay for our spot, the silence was broken by a roar…… Yes, a roar, so i am sitting there, trying to determine what kind of animal that was, somewhere in the back of my head it said….LION????….. yeah right, out here????
well, long story short, yes, it was a lion, out here, on Soledad canyon road, there is the Shambala Wild Life preserve.
There are tigers, lions , leopards, and many more other critters, they live here, mainly animals that have been rescued from a circus, or some kind of road show, they get to live their lives here in peace, and yes, you can see them, but you have to make an appointment, we did not, i just wanted to listen to them, i have a very hard time with animals in captivity, and yes, i know, these animals are treated very well, and they cannot go into the wild, but even so……
I will not go to a circus, the last time i went was when i was very young, i think around 8, and i saw some terrible things being done to the animals, this was in Scheveningen, in Holland.
Read about this preserve on Shambalawildlifepreserve.com Very interesting. 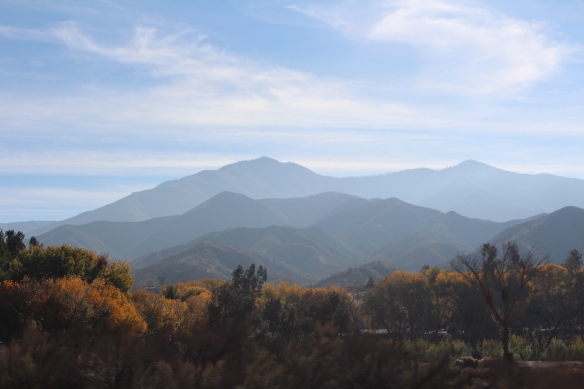 On route to Soledad canyon